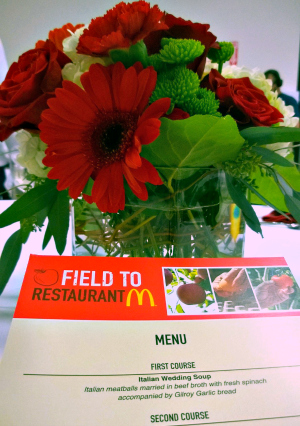 I was compensated by McDonald’s for my participation in this campaign as part of the Mom It Forward Blogger Network. Thoughts are my own.

I mentioned last week that I was going on a “Field To Restaurant” tour with McDonalds. Well I must say, I loved every part of the tour! So let me share what happened as I try to impart some of the things I learned that day.

We all met early in the morning (yes, 8am is early for me!) at a McDonald’s in San Jose, CA. I was actually surprised to find out that the tour delegates weren’t all bloggers. Aside from the McDonald’s PR and marketing people which I expected to be there, some of the people there are McDonald’s franchise owners, and some are local newspaper correspondents. 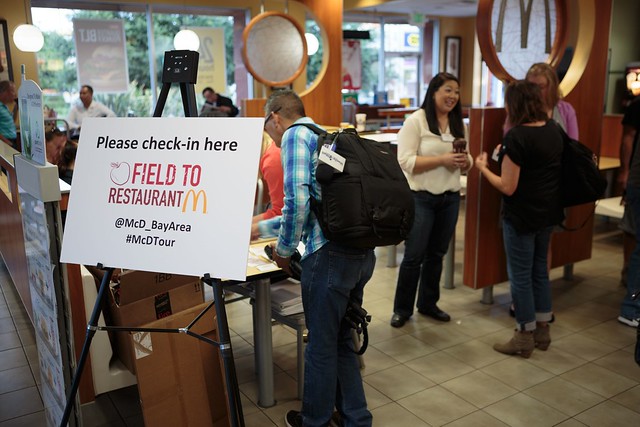 One of my highlights for that morning was getting to see my blogging buddies again. That is, aside from the fact that I had my favorite hashbrowns for breakfast. LOL!

We left San Jose  and headed to Salinas on a very nice bus which has WiFi and a restroom (nice!) on board. During the second half of our ride to Salinas, Steve Peat (owner of 9 McDonald’s restaurants in Gilroy, CA) of the Greater Bay Area McDonald’s Cooperative gave some welcome remarks and an overview of our tour. 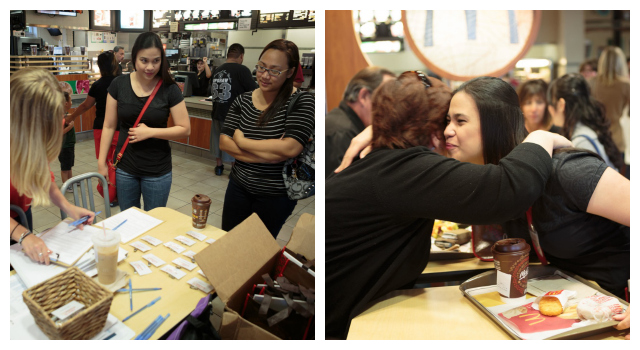 Left: That’s me and Icar of MyCharmedMom.com at the registration table
Right: That’s me hugging Lynda of MommyPowers.us 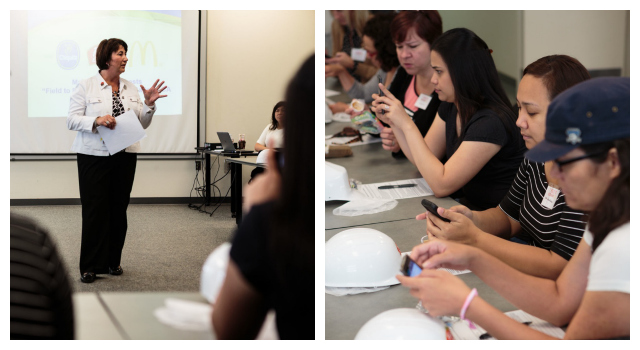 Left: Kathie Baka giving us a presentation full of information on how McDonald’s apples are produced
Right: Bloggers constantly posting on social media! That’s Lynda, me, Icar and Ana of BonggaMom.com

We all got excited when it was time to actually see the production of McDonald’s Apple Slices and Diced Apples. We had to wear a jacket because it was 32 degrees inside the production area, and were required to wear non-slip boots, a hairnet (and a beardnet for the men), a hard hat, a lab coat, latex gloves, and plastic sleeves.

And even though we already washed our hands before putting on our gear, we still had to dip our gloved hands into a sanitizing solution as we entered the production area. We also were not allowed to bring any gadgets or wear accessories/jewelry. That’s how strict they are when it comes to safety, cleanliness and sanitation inside the plant. 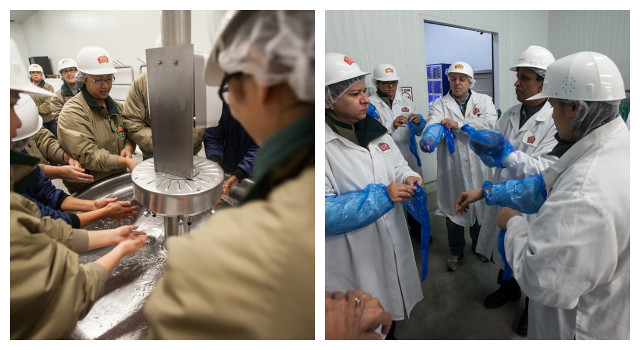 Left: The handwash station has around 8 faucets and 2 soap dispensers.
Right: Getting last minute instructions from Plant Director Nanu.

The apples smelled so good inside the plant, but I eventually became noseblind to it the longer we stayed inside. There are 2 different machinery in the area we toured — one for the sliced apples and one for the diced apples.

The plant director showed us the entry point of the apples where they get washed in water. The apples are then automatically brought to the part of the machine that peels off the skin, takes out the core and slices them.

Why do they have to peel the sliced apples? They say it’s to prevent choking since the sliced apples are mostly in Happy Meals which are for kids. But they don’t peel off the skin for the diced apples because the pieces are already small. They did mention that it’s better to eat an apple with the skin on because you’ll get more nutrients. 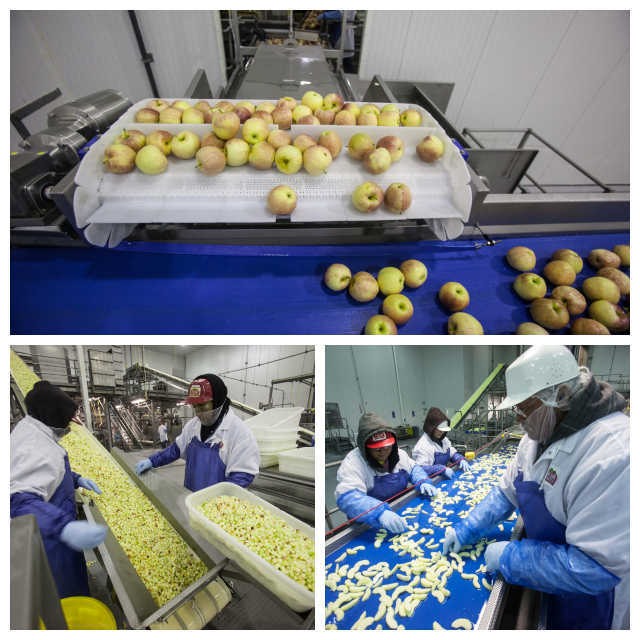 After getting sliced, there are quality control people that reject the not-so-good apple slices — ones that aren’t the right shape or size. The same thing is done by people on the other side checking the diced apples. The apples are dipped in an ascorbic acid solution — think lemon juice — that prevents discoloration, and are transported to the packing area.

You might ask, where do all the “rejected” apples go? We learned that anything that didn’t go into the finished packs (apple peels, core, non-crescent-shaped slices, etc) are used as feed.

As we saw the finished packs, we learned that each one has a code that tells them when and where the apples were produced. So in the event that someone calls McDonald’s up and complains about their apples, Chiquita can identify which plant, which line, which farm, which row and which tree the apple came from — all within 2 hours. 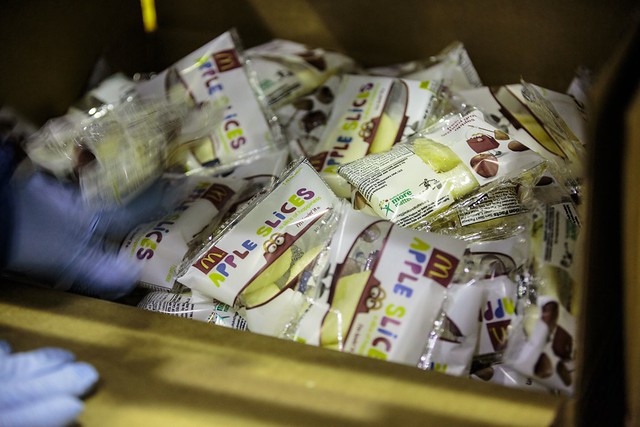 Chiquita Fresh Express also puts in some sort of metal onto the conveyor every 30 minutes which they expect the scanner/detector to reject. If their machine doesn’t detect that metal, production stops so they can take out everything that was produced within the last 30 minutes and fix whatever needs to be fixed in their machines. I think that’s one of the most amazing things I learned in the tour. I love the fact that they’re very proactive in making sure they supply McDonald’s with only the best apples.

After touring the plant, we headed over to Chiquita Fresh Express’ test kitchen for a gourmet lunch prepared by Chef Gene Sakahara and Chef Sam Bozzo (as a duo they call themselves Chefs SakaBozzo). They are both headlining chefs at the Gilroy Garlic Festival and they consider themselves twins separated at birth. I must say they are one hilarious duo! 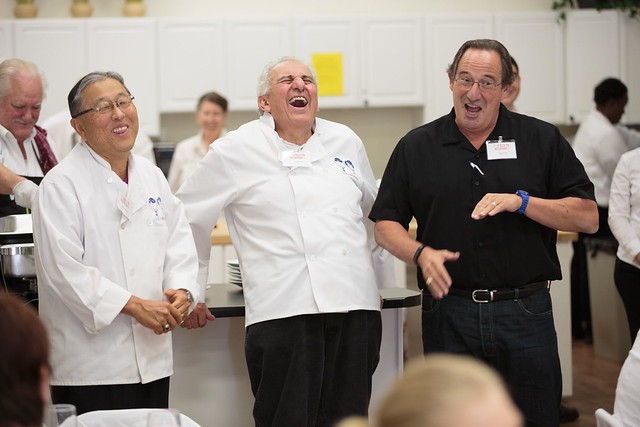 Chefs SakaBozzo created a full gourmet meal for us using only McDonald’s ingredients. The only thing they were allowed to add were spices but pretty much everything on the menu is from McDonald’s.

First to come out was the Italian Wedding Soup — italian meatballs married in beef broth with fresh spinach and garlic bread. What I liked about it was that the soup itself was very simple, nothing over the top, which I think complements the taste of the meatballs. 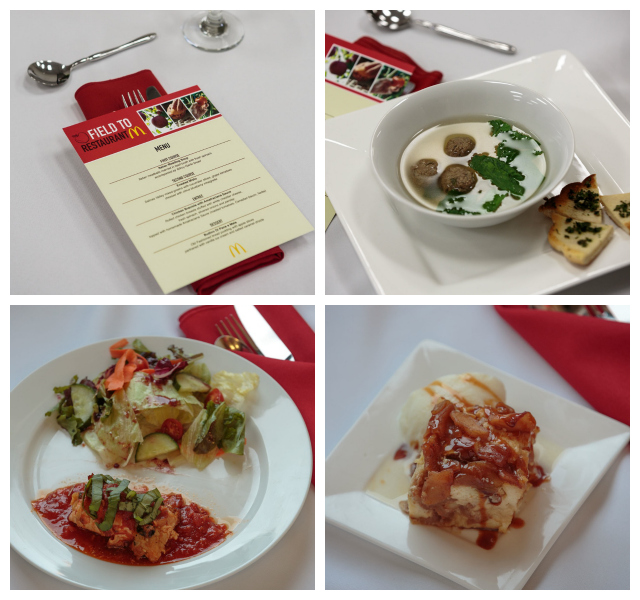 We then had Budino Di Pane e Mela for dessert. It’s old fashioned bread pudding with apple slices partnered with vanilla ice cream and salted caramel drizzle. Can you imagine the taste on your tongue? It was hard to imagine that the bread pudding used McDonald’s artisan roll. It’s just amazing how they can make so many dishes (that you’d probably only find in fine dining restaurants) using only ingredients from McDonald’s.

The last agenda of the day was a discussion with John Cisna, the Iowa teacher who lost nearly 60 pounds earlier this year by eating only McDonald’s food as part of a classroom experiment. I was really looking forward to this part of the day. I heard about him in the news months ago and have since been curious as to how he did it. 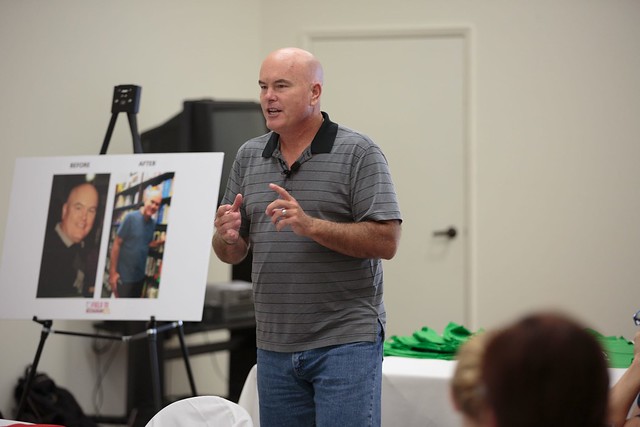 John Cisna highlighted the importance of choice. The difference between him and Morgan Spurlock (of Supersize Me) was that Spurlock ate everything that was offerred to him, while Cisna watched what he was eating and walked for 45 minutes 5 days a week. Spurlock gained about 24 lbs in 1 month, while Cisna lost 37 lbs in 3 months. Two different results for 2 people who ate from the same fast food.

He shared about the time he went to a doctor for a check up during the course of the experiment. The doctor said everything looked good and Cisna couldn’t believe it. So much that he asked the doctor to double check and told him about his current diet at that time. When the doctor heard that he was eating only McDonald’s food, he immediately left Cisna to double check the records but went back to confirm that it was Cisna’s.

John’s bottom line is, it isn’t the venue that should be in question. It should be our choices.

Honestly, John Cisna just echoed my thoughts from even before I went on this tour.

I know a lot of moms may think I’m an irresponsible person for eating at McDonald’s and a bad mother for allowing my son to eat McDonald’s food. But my family and I are healthy; my latest blood work can attest to that. I eat at McDonald’s but not everyday. Most of our meals are still cooked at home. It’s just sad that some like to point fingers and blame others for their health when it’s really our personal choices that can make or break us — health-wise or otherwise. 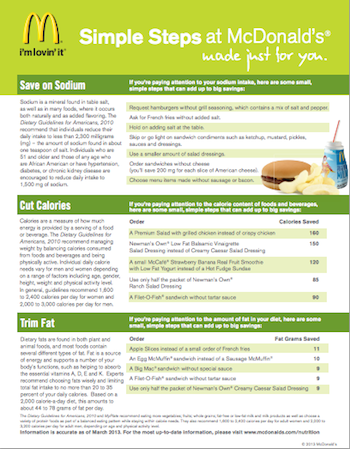 Now because of this tour, I learned the many changes that McDonald’s is making in their menu.  By 2020, they committed to do the following in 20 major markets including the US:

I think it’s great that McDonald’s is making sure that they offer good options to its consumers. And even though they’re still in the process of making these changes, don’t forget that you can always ask for customizations on your order — like leaving out the cheese or the dressing, or choosing grilled chicken instead of crispy chicken.

Do you eat at McDonald’s too? Do you make customizations on your orders or do you order the meals as is? Let me know in the comments below!

I was compensated by McDonald’s for my participation in this campaign as part of the Mom It Forward Blogger Network. Thoughts are my own. Photos courtesy of McDonald’s and Golin.