I received this CD for purposes of evaluation. Thoughts are my own. 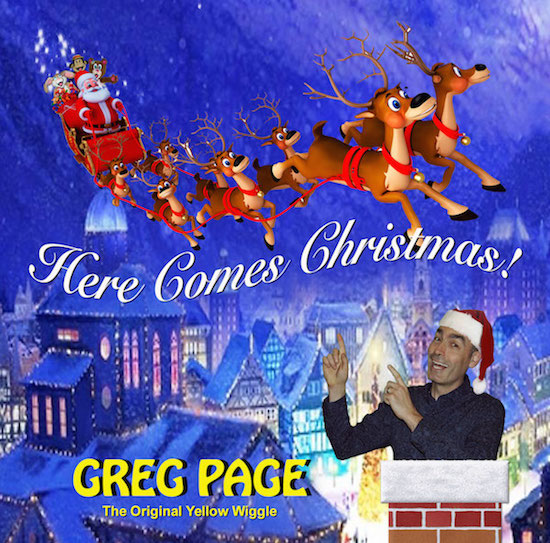 Nothing makes me feel the warmth of the holiday season the way Christmas songs do. I love listening to and singing Christmas carols, so when I found out that Greg Page — the original/longtime Yellow Wiggle of kids’ music phenomenon The Wiggles — came out with a Christmas album, I immediately wanted to listen to the album!

Greg Page has been awarded the Order of Australia (knighthood) for his services to the arts, particularly to children’s entertainment. Among his other honors are an Australian Record Industry Hall of Fame Award and seven ARIA (Australian Grammy) awards. He’s also a huge Elvis fan and owns one of the world’s largest collections of Elvis memorabilia.

I must admit that I got sad when he left The Wiggles. After nearly 17 years with The Wiggles, Greg had to leave the group due to a condition called orthostatic intolerance. While Sam (the person who replaced him as the Yellow Wiggle) was also really good, there’s really nothing like the original. But don’t get me wrong, I also really loved Sam during his stint with the group. Anyway…….

Greg is doing much better now, having learned to manage the condition by understanding its causes, and he’s back in action as an entertainer. His new holiday album for families titled Here Comes Christmas! is an all-ages album that includes standards like “Let It Snow,” “The Christmas Song,” “White Christmas,” “Winter Wonderland,” “Jingle Bell Rock,” etc., plus three originals written by Greg Page and his Chicago-based producer, Alec Miller. Stylistically, Here Comes Christmas pays homage to old-school orchestral arrangements such as those made famous by Bing Crosby, Perry Como, and Dean Martin.

I love listening to the CD with my son. His singing style as part of The Wiggles is still there. His style is simple and it’s something that kids can easily sing along to. He didn’t add in lots of vocal acrobatics (and I think that’s what made the songs so classic and easy to love.

You can purchase the album here or on iTunes.

I received this CD for purposes of evaluation. Thoughts are my own.