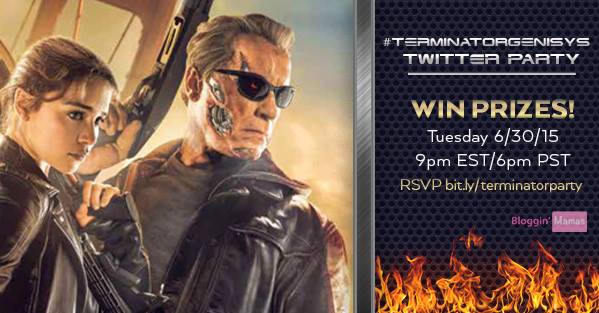 Join us for the #Ter­mi­na­tor­Genisys Twitter Party as we celebrate the new film and talk about the Terminator franchise!

Join Blog­gin Mamas and the @Terminator for the #Ter­mi­na­tor­Genisys Twitter Party on Tuesday, June 30 at 9pm EST (6pm PST)!

When John Connor (Jason Clarke), leader of the human resistance, sends Sgt. Kyle Reese (Jai Courtney) back to 1984 to protect Sarah Connor­ (Emilia Clarke) and safeguard the future, an unexpected turn of events creates a fractured timeline. Now, Sgt. Reese finds himself in a new and unfamiliar version of the past, where he is faced with unlikely allies, including the Guardian (Arnold Schwarzenegger), dangerous new enemies, and an unexpected new mission: To reset the future…

During the Twitter Party there will be a chance to win one of the following prizes by answering various Terminator Trivia. Winners will be selected at random from all eligible entries.

Disclosure: Bay Area Mommy was compensated for cohosting this Twitter Party. All prize fulfillment is the respon­si­bil­ity of the sponsor.