* I received a Wubble Bubble Ball for purposes of evaluation. Thoughts are my own.

My son loves playing with bubbles. There was even a time that I had to buy a big jug of bubbles at Toys R Us because he and his friend loves popping those small bubbles in the air. And when he saw the Wubble Bubble Ball on Youtube one time, he kept on telling me that he wants to buy it. So it’s just great that I was offered the opportunity to review the Wubble Bubble Ball.

Inspired by his children’s wish for a real bubble to play with, NSI President Frank Landi developed the Wubble™ Bubble Ball to keep children’s love for fun, active play alive. The Wubble Bubble Ball is exactly what its name says it is — a big bubble ball that wobbles. It looks like a big bubble that bounces!

Wubble has won numerous toy awards, including an Oppenheim Toy Portfolio Best Toy Award, a National Parenting Center Seal of Approval, a Mr. Dad Approved Award, a Parent’s Choice Award and the Dr. Toy Best 100 Picks Award and more! Target selected the Wubble™ Bubble Ball as a 2014 Top Toy for the Holiday Season. It was listed among other popular toys and games that are sure to be on every holiday wish list. Wubble Bubble Ball is also a Family Fun Toy Of The Year Award Winner. The 25 winners are featured in the November 2014 issue of Family Fun Magazine.

Wubble Ball’s are not indestructible, but they have a lifetime replacement guarantee. It costs $6.99 to replace a Wubble under the guarantee. 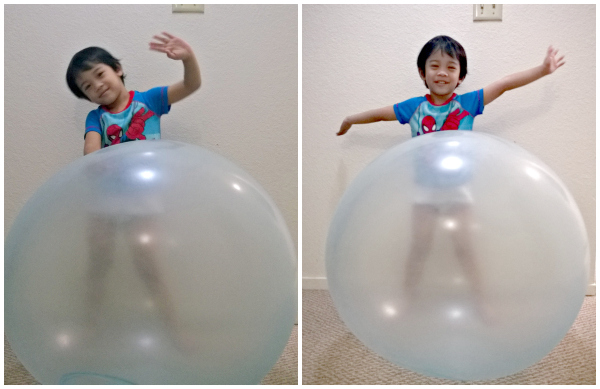 My son couldn’t keep his hands off the Wubble Ball once I was able to pump air into it! I didn’t want to put too much air inside because I was afraid it might become too sensitive to my son’s rough play. And true enough, he played with it a lot! But our Wubble Ball didn’t pop despite it getting tossed around so much.

I think this is an awesome toy gift for the holidays, especially those who love playing with bubbles and balls cause this looks like a big bubble. I only had to deflate it because my son wouldn’t stop playing and my husband’s getting a little too annoyed already.

* I received a Wubble Ball for purposes of evaluation. Thoughts are my own.