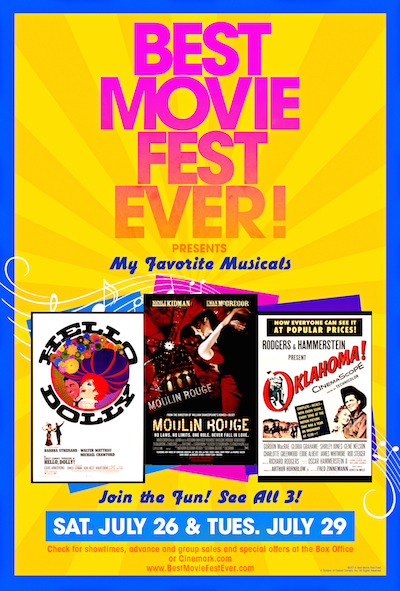 Cinemark, one of the world’s largest motion picture exhibitors, has announced a partnership with Best Movie Fest Ever to present the first of its monthly film series at 10 Cinemark theatre locations across the country. “My Favorite Musicals,” featuring 3 award-winning musical classics, will take place on Saturday, July 26th and Tuesday, July 29th.

The special 4K restoration of Oklahoma! will be screened at 30 frames per second — an identical frame rate as the film’s original release in 1955. Meticulously restored from 65mm Todd-AO elements by Twentieth Century Fox, Twentieth Century Fox Home Entertainment, and Fotokem, this stunning presentation captures as much detail from the film as possible. The beautiful images showcase the majesty of the frontier in a way never-before-seen and further magnified by the big screen!

The price to see all three films is just $15.

To purchase group and advance tickets, and for more information about additional in-theatre offerings, visit the participating theatre box office or go to Cinemark.com.