As a Fox Home Entertainment Insider, I receive Blu-Rays and DVDs for promotional purposes. Thoughts are my own.

Walking With Dinosaurs The Movie releases tomorrow on Blu-ray & DVD! 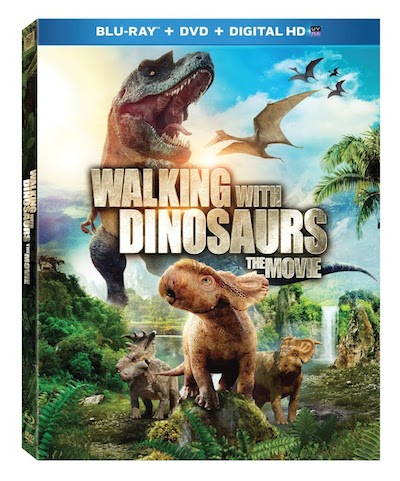 Walking With Dinosaurs is known for it’s explosive visual achievements in bringing dinosaurs back to life! The gigantic voice talents of Justin Long (Alvin and the Chipmunks franchise) and John Leguizamo (Ice Age franchise) take you on a thrilling prehistoric journey the whole family will enjoy!

In a time when dinosaurs rule the Earth, the smallest of the pack — a playful Pachyrhinosaurus named Patchi — embarks on the biggest adventure of his life. As he tries to find his place in a spectacular world filled with fun-loving friends and a few dangerous foes, Patchi will discover the courage he needs to become the leader of the herd…and a hero for the ages.

Did you know that:
– A stegosaurus was twice as heavy as a car, but had a brain only as big as a kitten?
– Dinosaurs were not alone? Alphadons were small mammals, similar to possums, that roamed the earth with dinos!
– Some believe that the Tyrannosaurus rex might have had feathers?
– Pachyrhinosaurus (the kind of dinosaur Patchi was) means “thick nose reptile”, probably named for the pad of bone it had on its face instead of horns or a brow?
– Carnivores are believed to have lived about 30 years, while herbivores lived longer?

Hmm… I didn’t know that!

Check out these activity sheets!

You can learn more facts like these when you watch Walking With Dinosaurs! Are your children learning about dinosaurs in school? Want to teach them more? You can use these activity sheets to test your knowledge and play some fun games!