I received the Delivery Man Blu-Ray for purposes of evaluation. Thoughts are my own.

How would you react if you found out you’re the parent of 533 children? Obviously, that would be impossible but what if? Just knowing that someone has 4 or more children already seems so stressful for me. In fact I can’t even imagine how I can manage everything if I get pregnant again. But 533? That has got to be really crazy! Thank God the “Delivery Man” is not a true-to-life story. 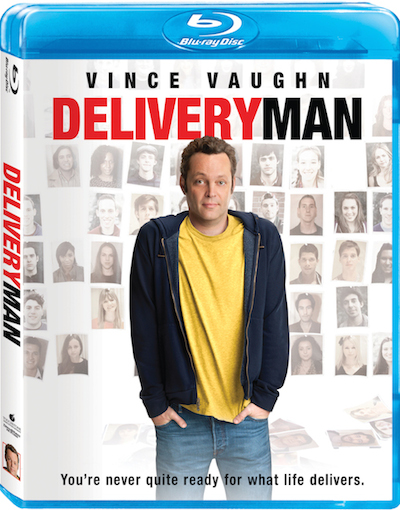 Don’t miss Vince Vaughn, Cobie Smulders & Chris Pratt in the outrageous and heartwarming story about an affable, middle-aged underachiever who finds out he has fathered 533 children.

Film Synopsis:
In this heartwarming comedy, underachiever David Wozniak (Vince Vaughn) learns he’s actually an overachiever — he’s fathered 533 children via donations made twenty years earlier! David soon discovers that the shock of his life might just be the best thing that’s ever happened to him. Along the way he discovers not only his true self, but also the father he could become. Also starring Chris Pratt and Cobie Smulders — and complete with bonus materials, including behind-the-scenes footage — it’s a feel-good movie that really delivers.

David Wozniak in this film did not want to reveal his identity as “Starbuck”, an overly generous donor at the sperm bank in the 90s. But he got curious about who his children are so he checked out the profiles and visited them and tried to help them out — his way of being a “father” to them without actually telling them that he was their father.

I love the way the story developed into a really entertaining family movie. And I love how David started to change his perspective upon knowing that he has become a father and realizing what being a father means. I think it’s pretty much the same for almost everyone of us. I mean, I must admit that when I was single, my highest priority was just myself. But now that I have a son, it’s like my world has changed and I started to put the needs of another person before mine. So yes, while the premise of the Delivery Man may be impossible, his journey as a first time parent is something other parents can easily relate to.

The Delivery Man is a good movie with lots of laugh-out-loud moments as well as heartwarming ones — something my husband and I would gladly watch all over again and still enjoy.

BUY IT! The Delivery Man is now out on Blu-Ray, DVD, Digital and On-Demand! Be sure to look out for it at your nearest retailer!