I am a member of the Entertainment New Media Network, and we help promote, sometimes for a promotional fee, entertainment industry projects we find meaningful. As always all opinions are my own. For a full disclaimer, visit www.ENMNetwork.com/disclaimer. 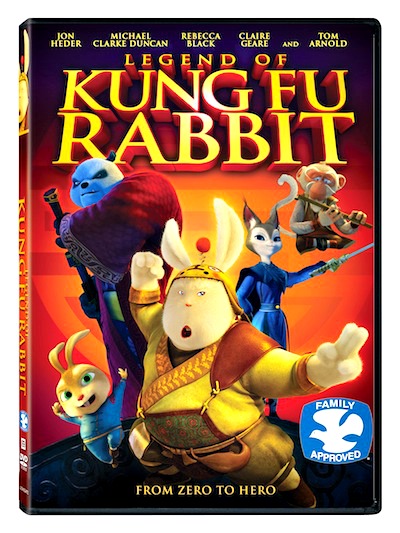 With a cast headlined by Jon Heder (Napoleon Dynamite), Tom Arnold (Hit and Run) and Academy Award® nominee Michael Clarke Duncan (Best Actor in a Supporting Role, The Green Mile, 1999) along with pop singing sensation (the smash hit “Friday”) Rebecca Black in her feature film debut, the Legend of Kung Fu Rabbit follows Fu as he embarks on a journey to become a kung fu master. The Legend of Kung Fu Rabbit has been awarded the DOVE Foundation Seal of Approval.

In order to keep his promise to aging kung fu master Sifu, Fu the rabbit, a humble chef, must venture out of the comfort of his kitchen. He teams up with Penny, a kung fu prodigy, and her sidekick Biggie to go on a heroic quest to defeat Sifu’s arch-nemesis, Slash to save their kung fu academy from peril.

I wasn’t expecting too much about this movie because I’ve never heard of it before. And when I’m not familiar with a movie, my initial impression is that people didn’t really like it enough for it to become popular. When we did watch the movie, I couldn’t help but compare it to Kung Fu Panda. The 2 movies had too many things in common but Kung Fu Panda is just really too funny compared to this one so I can’t say that I’m thrilled about this one.

But my little one loved this movie! He was laughing at certain scenes and kept saying “wooooow” throughout the movie. I guess he really liked the animation and all the action. So with that, I’d recommend this for kids but probably not for adults.

Here are 2 quick feature clips for The Legend of Kung Fu Rabbit:

BUY IT! The DVD will be out tomorrow and will cost $19.98 at your nearest retailer!

WIN IT! Get a chance to win a Legend of Kung Fu Rabbit DVD! Giveaway ends September 27, 2013 at 11:59pm EST. Open to the US only. Void where prohibited. Must be at least 18 years old to be eligible. No purchase necessary. To enter, use the form below.