Want a chance to to win a trip for two to the IRON MAN 3 world premiere in Los Angeles on April 24th?

Awesome! Cause Iron Man is having a sweepstakes over at their Facebook page!

Tony Stark needs your help to stop the Mandarin! Answer trivia questions to unlock Tony’s armor and send in the reinforcements!

The sweepstakes started today and runs until this Wednesday! Each day, fans can enter for a chance to win tickets and unlock two suits in Tony’s armor. Visit Facebook.com/ironman or http://awe.sm/q0PyB for details!

*No purchase necessary. Void where prohibited. For the official rules of this Iron Man sweepstakes, click here: http://on.fb.me/10EN7fx 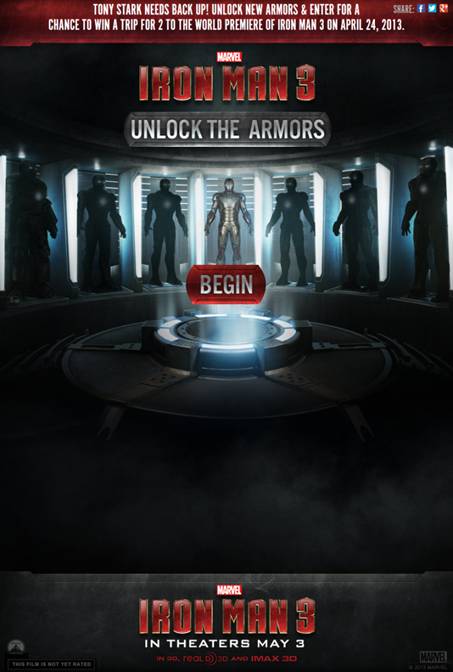 Starring Robert Downey Jr., Gwyneth Paltrow, Don Cheadle, Guy Pearce, Rebecca Hall, Stephanie Szostak, James Badge Dale with Jon Favreau and Ben Kingsley, Marvel’s “Iron Man 3” is directed by Shane Black from a screenplay by Drew Pearce & Shane Black and is based on Marvel’s iconic Super Hero Iron Man, who first appeared on the pages of “Tales of Suspense” (#39) in 1963 and had his solo comic book debut with “The Invincible Iron Man” (#1) in May of 1968.

In Marvel’s “Iron Man 3,” Tony Stark/Iron Man finds his world reduced to rubble by a malevolent enemy and must use his ingenuity and instincts to protect those closest to him as he seeks to destroy the enemy and his cohorts.